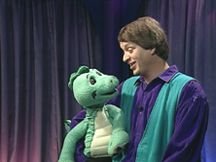 Ventriloquist Randel McGee found Groark in 1978, and they have been inseparable ever since. Through the magic of ventriloquism and puppetry, they transcend language and cultural differences and bring people together through the common ties of laughter, learning and song. Their delightful presentations encourage kids to be kind and thoughtful, to respect themselves and others, to make ethical choices and to work out their conflicts peacefully and fairly.

Randel has worked as an artist-in-residence, a literature consultant, university instructor, and storyteller. In 1991 and 1992 he was selected as U.S. representative to international puppet festivals in Japan and Korea, and he and Groark have toured those countries as well as most of the U.S.

In addition to his puppetry, Randel performs in costume as Hans Christian Andersen, telling stories and cutting elaborate designs out of paper. He lives in central California with his wife, five children, and dragon.