Click here if you are having trouble viewing this newsletter.

CAUGHT ON CAMERA (in a high school) 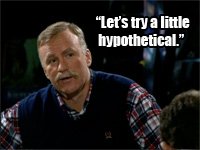 Dr. Mike: Let’s try a little hypothetical. Your mom and dad are going away for the weekend, and they tell you not to have anybody over while they’re gone. They say they trust you to take care of yourself and to follow their instructions not to have anybody over to the house. But, as it happens, you’re in a drama class at school, and there is a classmate you feel very attracted to. And you want to rehearse a scene with this person. You know he or she could come to your house and you’d have the place all to yourself. The chances of your parents finding out are slim to none. What would you do?

Girl: My parents seem to find out everything.
(Laughter.)
Boy: I wouldn’t do it, because if anything can go wrong, it will. If something happens, you’re going to talk to somebody. And somehow it’s going to get back to your parents. You can’t keep secrets. 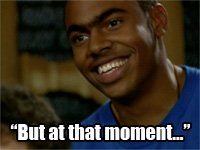 Dr. Mike: Clarence, what would you do?
Clarence: You invite her over, and if anything happens, you deal with it later. But at that moment. . .
(Laughter.)
Dr. Mike: Why would you invite her over?
Clarence: You could die that night. You don’t want to look back 30 years later and think of all the things you could have done in high school. In the long run of life, so what if you’re in trouble for a few weeks!?

Dr. Mike: Okay, so your parents come home. “Hey, Clarence, we’re home. Did you have a good time?”
Clarence: (with a knowing smirk) Uh huh. 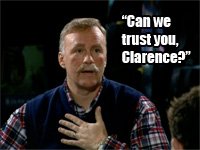 Dr. Mike: Was anyone in the house?
Clarence: (firmly) No.
(Laughter.)
Dr. Mike: You’re sure nobody was in the house?
Clarence: No. Just me.
Dr. Mike: Can we trust you, Clarence?
Clarence: Of course you can.
Girl: A lot of my friends will have people come over despite what their parents say. But I can’t. I don’t know about the whole trust thing, but I just couldn’t have any fun. I’d be too worried that something would get broken. Or Grandma would ride by, or something like that.
Dr. Mike: Clarence, what’s that hanging over the dining room chair? It looks like a  girl’s sweater. (Pause.) You don’t have a sister, Clarence. (Clarence struggles.)
Dr. Mike: Clarence, do you want to change your story?
Clarence: I was — knitting. I was –
Dr. Mike: Clarence, look at me, were you lying? 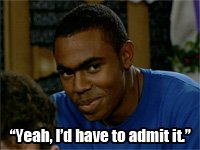 Clarence: Yeah, I’d have to admit it. I’d have to admit at that point, you have to come out and tell the truth.
Dr. Mike: Would you?
Clarence: Yeah. I’d say I was lying.
Dr. Mike: What does that do between you and me? I’m your dad.
Clarence: It breaks the trust.
Dr. Mike: Who broke the trust?
Clarence: I did.
Dr. Mike: How does that make you feel?
(Clarence pauses, and the class laughs.)
Clarence: I feel bad that I don’t have my father’s trust anymore, but if I feel in the first place that I should have been allowed to have someone over anyway, I still don’t feel like I should be . . .
Dr. Mike: Listen to what you just said: “I feel bad, but . . .” Did you hear that? Because the minute you say “but,” you’re coming up with an excuse. “I feel bad that I broke your trust, Dad, but, let me tell you why I’m justified.
Clarence: I didn’t feel bad that I had hurt him. I felt bad that I don’t have his trust.
Dr. Mike: So, how important is trust between you and your parents?
Clarence: It’s quite important. 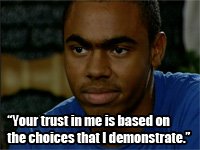 Dr. Mike: You made a choice to break it. Are you talking out of both sides of your mouth?
Clarence: No. (Pause, fumbles for words.) It’s more important.
Dr. Mike: Then let me ask you, if I trust you, is it based upon the choices I make, or the choices you demonstrate?
Clarence: Your trust in me is based on the choices that I demonstrate.

Yes, you read that right. A teenage boy caught in a lie actually said “Your trust in me is based on the choices that I demonstrate.” Life has its moments, and we call this one a character education moment (and a Socratic one, at that). A student is given an opportunity to make a choice, defend that choice, and, finally, is forced to recognize that his choice directly contradicts his own values. (Kudos to Dr. Mike for landing this one right on target.)

GREAT, SO WHAT’S THE POINT?
Glad you asked—there are a few points that are well worthy of notice in this dialogue. One is that all Dr. Mike did was ask questions—not a word of lecture. But they were questions that forced Clarence to keep digging a bigger and bigger hole, until he finally fell into it (the hallmark of Socratic Method). Asking questions is a much more powerful way of getting students engaged than lecturing to them.

Another point is that character education can be fun. The teens in this discussion (about 15 of them) had a great time grappling with hypotheticals and comparing their thoughts and feelings to those of their classmates. In fact, this kind of discussion often opens up students who normally wouldn’t participate at all.

And finally (having nothing at all to do with the dialogue you just read), there are many ways to approach character education (see How to Do Character Education). From group discussions to interactive software to sports to service learning and beyond, we support them all through our store at LiveWireMedia.com and our  free content website at GoodCharacter.com. Come visit us sometime soon. We’ll leave the light on for you.

Have a great new school year,
David and Freddy

BTW: the dialogue between Dr. Mike and Clarence is from Volume #1, Trustworthiness, in our 10-volume DVD series, In Search of Character. You can see this video excerpt in its entirety here. 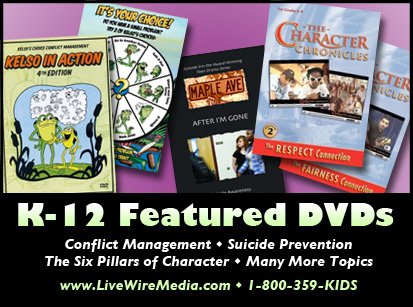 Alfie Kohn, an all-round smart observer of what goes on in schools, explains why character education is important in all aspects of education.

Students at a South Carolina school are learning character education through the sport of golf, showing that any subject can help develop a student’s character.

As a force for peace and understanding, foreign exchange provides proven benefits. You might use this news article with your high school students to inspire them to think of ways to design something that brings diverse people together.

The discussions in our K-12 videos have always been based on the Socratic method. Here is an article we have written on using Socrates’ questioning techniques to help you lead your own great classroom discussion.

No matter what grade level you teach, students of all ages can learn to put their character into action, especially by service learning. The Strawberry Point Service Learning primer is an excellent guide for starting a character education program in your school.

This e-how article gives step by step instructions on how to choose a character education program for your classroom.

Our teaching guides are great for starting a classroom discussion on character traits. No matter what grade level you teach, we have a discussion guide for you.

“I Love That Teaching Idea” has a number of simple lesson plans, by teachers like you, to help incorporate character education into your program.

Aesop’s Fables are an excellent way to teach young children character education. Many of the stories are short, and they all present a moral at the end:

Rutgers University has a list of character education lesson plans, all of which meet the New Jersey State Content Standards.

P.S. We realize that there is some confusion about who we are. Are we GoodCharacter.com or LiveWireMedia.com? Well, actually, we are both. While we have created character education and guidance DVDs that we sell through Live Wire, we have also built GoodCharacter.com as a free resource website. I guess that’s because, in addition to being media producers, we both are also educators. So, we offer our DVDs for sale as a way to continue producing new material and generating ideas and free material on GoodCharacter.com

We’d love to hear your comments and ideas. Check out Live Wire Media and GoodCharacter.com on Facebook!

Please send us your comments, suggestions, character education stories, and anything else that you think would be of value to our subscribers. Email us today!

This newsletter is provided as a service to educators by Live Wire Media and GoodCharacter.com
PO Box 848, Mill Valley, CA 94942
© Copyright Elkind+Sweet Communications, Inc. All rights are reserved.