Click here if you are having trouble viewing this document.

And the Gold Medal for Anger Management goes to…

“Anybody can become angry – that is easy, but to be angry with the right person and to the right degree and at the right time and for the right purpose and in the right way – that is not within everybody’s power and is not easy.” —Aristotle

No, that certainly is not easy. What makes it especially difficult is that it requires clear, rational thinking while drowning in a flashflood of emotion—two competing parts of our brain that have to find the right balance.

But, apparently, Rodney King knew how to do that. Remember Rodney King? He was the African-American gentleman whose dramatic beating by officers of the Los Angeles Police Dept. was caught on camera and broadcast worldwide back in 1991. And when the officers were tried and acquitted of brutality charges, sparking weeks of bloody rioting, Rodney King went on television and made his famous plea, “Can we all get along?” Despite the beating he suffered, Rodney King saw clearly that the anger being vented in the streets of Los Angeles was not aimed at the right people, nor to the right degree, nor for the right purpose, and certainly not in the right way. And so, our choice for the Gold Medal in Anger Management goes to the late Mr. Rodney King. May his example light the way for us all to get along.

As hard as we might try, we may not be able to just get along. But we have to persist. What choice do we have? We need to teach our kids to deal with their anger and learn to resolve conflicts peacefully. But . . . first don’t we parents and teachers also need to learn to control our own anger when kids around us are throwing fits? Because it’s real hard not to lose our cool when these kids—so expert at pushing our buttons—get under our skin. We know, we’ve got teenagers of our own. How can we possibly be role models if we ourselves are out of control?

Let’s get some expert guidance from Kim Abraham LMSW and Marney Studaker-Cordner LMSW. They tell us what “Not to Do When Your Child is Angry.” Here are some key points from their article.

Their solid advice, in short, is:

Easy. Right? So, now that we are calm, cool, and collected, we can go on to teaching our kids how to deal with their anger. You’ll find some helpful resources by scrolling down the page.

“Those whom the gods wish to destroy they first make mad.”
—Anonymous ancient Greek 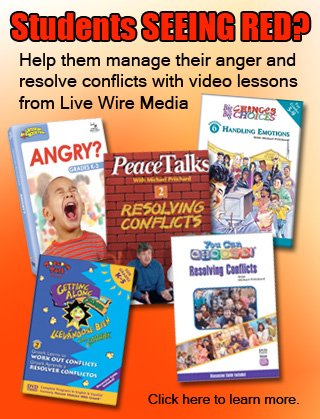 Are you that teacher whose email we deleted?

At the end of March a very enthusiastic teacher emailed us asking permission to link to goodcharacter.com from his/her school website. Unfortunately, we couldn’t send a reply because we accidentally deleted the email. So, if you are that teacher, or any teacher for that matter, the answer is YES. Lots of schools have linked to goodcharacter.com because they’ve discovered what a rich source of material it is for their students and themselves.

Packed with discussion questions, ethical dilemmas, writing assignments, learning activities, lesson plans, and much more—goodcharacter.com has it all. If you haven’t already explored this amazing (free) resource, you really should check it out. You’ll be in good company.

And, yes, we really did lose that email.

We begin our recommended resource list with a publication from the Manitoba Department of Education. “Classroom Behavioral Strategies and Interventions” lays out a variety of techniques and procedures for reducing classroom conflicts. It emphasizes “positive reinforcers” including “Using RID to Reduce Your Anger” a three step strategy that includes Recognizing anger signals, Identifying a positive approach, and Doing something constructive.

This article from The Globe and Mail recommends important guidelines for preventing a parent-child conflict from turning violent.

Children have their own set of issues that cause them to get angry just like we adults do. PsychPage offers tips for parents and teachers on how to handle a child’s anger while describing how discipline and anger management go hand in glove. As a starting principle the article recommends that we simply admit that anger is normal.

So let’s teach teens how to recognize their anger and then manage it. This article, providing ways of understanding emotions, will help teens look at the things that trigger their anger.

This Scholastic article explains why younger children have a tendency to get angry. It makes the point that “young children have a lot to be angry about. They’re little. They aren’t allowed to do everything they want. They fail at many of the things they try.” Here are ways for kids to overcome their anger during stressful times.

“Speak when you are angry and you will make the best speech you will ever regret.”
—Ambrose Bierce

One DVD we at Live Wire Media produced as part of our 10-part “You Can Choose!” video series shows kids how they can resolve conflicts. We have posted the discussion guide for “Resolving Conflicts” at both our GoodCharacter.com and our LiveWireMedia.com websites. You can use the discussion guide successfully in the classroom even if you don’t have the video. But in our not so humble opinion, as the producers of this series, we think your students will love the engaging skits and the terrific songs.

This Morningside Center lesson plan presents some situations for young children to role play—a terrific technique for teaching kids how they can resolve conflicts peacefully.

This lesson plan looks at the meaning of conflict and then at win-win situations in order to manage anger.

“Are you a Peacemaker or a man eating shark?” is the name of this lesson plan. It will help students understand anger. The book, Margaret Mahy’s “Great White Man-Eating Shark,” can be found at your local library, though the lesson can easily be conducted without the book.

A simple craft project for younger students offers kids the opportunity to learn to cooperate and resolve conflicts while working together.

Not all SPAM is bad. The Examiner has posted a lesson plan that teaches students about a new kind of SPAM – Stop, Ponder, Appreciate, Moment. The lesson plan includes two stories, a writing assignment, and a role play activity.

President Carter created his center to promote peace. One of its posted lesson plans exemplifies the concept of “use your words.” With it, students can understand how good communication is a key to conflict resolution. (PDF)

The National Liberty Museum in Philadelphia was founded to help “combat America’s growing problem with violence and bigotry by celebrating our nation’s heritage of freedom and the wonderful diverse society it has produced.” One of the Museum’s lesson plans is designed to prevent school violence. It is news-based and would be helpful for seventh and eight graders. (PDF)

Here is a creative exercise in self-reflection that should engage any high school student. It can be completed with or without a facilitator. After responding to a series of well-structured questions, students are asked to reflect on situations in which they were angry in the past and how they might better handle their anger in the future. The exercise is in two forms, a questionnaire and an accompanying slide show.

A news story about soccer player David Beckham launches this BBC assignment that has students look at anger-producing situations while examining how stress influences our emotions.

An internet search for “school fights and violence” produces a flood of stories, many that point out the fights start because of bullying or cyber-bullying.

Rarely do we see examples of someone turning a bullying episode into something positive. Here is a story describing how one woman, after being a victim of internet bullying, surprises us by not responding with anger. Instead she calmly and rationally turned her experience into a teachable moment.

1. Digital rights are now available for many of our video titles. This allows you to load the program onto your school or district server and stream it on demand to any classroom at any time as often as you wish. For details, visit www.livewiremedia.com/digitalrights.

2. We are expanding our Life Skills offerings by adding DVDs on Cyber Safety and Personal Finance. Click on either of these links to see the lineup of titles we have for these subject areas.

Please send us your comments, suggestions, character education stories, and anything else that you think would be of value to our subscribers. Email us today!

This newsletter is provided as a service to educators by Live Wire Media and GoodCharacter.com
PO Box 848, Mill Valley, CA 94942
© Copyright Elkind+Sweet Communications, Inc. All rights are reserved.

If you do not wish to receive future GoodCharacter Bulletins from us, please reply to this email and type “REMOVE” in the subject line. We will remove you from our list immediately.