The teen years have always been a time of turmoil, but adolescence seems decidedly more pressured now than ever before. One girl participating in THE POWER OF CHOICE describes a classmate’s insistence on keeping all his burdens to himself as “building up scar tissue on your heart.”

In this program, comedian/teen counselor Mike Pritchard and students from St. Louis; New York City; Cleveland; Detroit; Columbia, South Carolina; and Gainesville, Florida, talk about the pressures they face, from academic competition to peer acceptance and parental expectations. In small group dialogues, they grapple with ways of keeping pressures in perspective and of learning to handle those pressures in ways that serve their best interests. 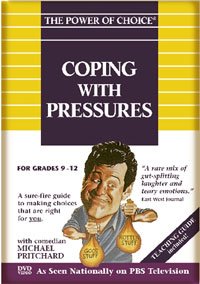 1. What pressures are you under? Give both a negative and a positive pressure.

2. How do you distinguish between good and bad pressures?

3. Describe a time when the pressure you felt to excel at something got in the way of appreciating or enjoying it.

4. Can you think of a time when you felt like you were getting a lot of pressure from others, but it turned out that you were actually putting that pressure on yourself?

5. What’s the worst way you’ve ever dealt with a pressure? How could you have handled it better?

6. What’s the best way you’ve ever dealt with a pressure? What did you learn from that?

7. Is there a relationship between our self-esteem and the way we respond to pressures? Describe a time when high self-esteem helped you overcome a pressure you felt was
wrong.

8. Do you ever put unfair pressure on yourself because you can’t say “no?” How could you change that?

9. In what ways do you think pressure might affect the way you make choices?

10. Have you ever lost perspective because you were under heavy pressure? How did that affect the choices you made?

11. Some of the kids in the video said they thought it made them stronger to cope with their problems on their own. Others argued it was better to reach out for help, or at least talk to someone. Which do you agree with, and why? Do you have someone you can go to when you are feeling under pressure?

12. What is peer pressure? Is it more influential for teenagers than for other age groups? If so, why?

13. How do you respond to peer pressure? Would you give an example?

16. Do you have a role model who copes well with pressure? Describe that person.

1. List the pressures you are under and rank them from smallest to largest. Explain why you have these pressures at this time. Indicate if any are related to each other: for example, family pressures or pressures over grades you feel both at school and at home. Then write out a strategy for coping with the largest pressure and the smallest pressure.

2. Write about some of your qualities that help you cope with negative pressures in your life. Name some of your weaknesses that allow these kinds of pressures to get to you. How could you compensate for these weaknesses at times when the pressure is on?

3. Write about one or two positive pressures in your life. What’s good about them? How do you respond to them? In what ways do they serve your best interests?

4. Write a short dramatic scene in which someone is under peer pressure to go driving with a group of drunken friends. Show how this person can get out of the situation without alienating his or her friends.

5. What kinds of pressures do you feel you are under just because of your age? Write an essay describing this pressure, and explain why you don’t expect this pressure to be part of your life in the future.

3. Write two headings on a blackboard or on large piece of paper: “Legitimate Pressures” and “Illegitimate Pressures.” Take turns listing things under these headings. Then discuss what’s good about some pressures, and make suggestions for how people can overcome the negative effects of illegitimate pressures.

“Coping With Pressures” – The Video

In this program, comedian/youth counselor Michael Pritchard, talks with students in Philadelphia, Atlanta, Cleveland, and Minneapolis, to discover how our values can guide us in making choices that are right for us. Learn more . . .

“THE POWER OF CHOICE”
The Series

The Power of Choice with Michael Pritchard is a 12-volume youth guidance video series aimed at empowering teenagers to make good choices in their lives. It teaches young people that they have the power of choice, that they are responsible for the choices they make, and that they owe it to themselves to choose the best.
Learn more . . . 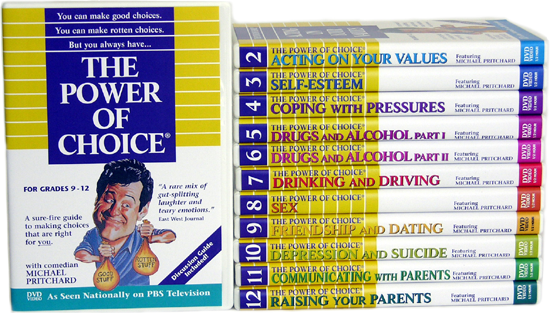 For more information about individual videos in this series, click on the title below.

If your school or organization does not have these videos, you can purchase them from Live Wire Media, or request them from your local library.